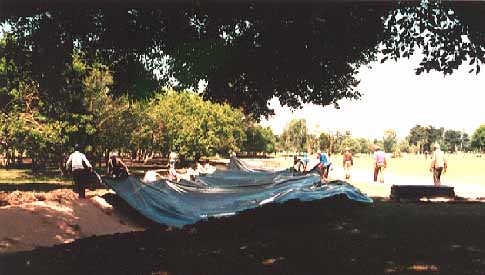 In April 1991, the U.S. Consulate of Morocco began a search for information about potential materials to use in remodeling an 18 hole golf course at the summer palace of King Hassan II of Morocco. Several lakes and streams were being constructed on the golf course, and the consulate staff needed information for a meeting with the designer, Mr. Cohan.

In Cohan's design, a series of streams, waterfalls, and reflecting pools would transverse the length of the golf course. The plan would add striking visual effects to an already beautiful 20-year-old course. In addition, the design would add the auditory effect of flowing water in this tropical oceanside setting. The water supply was to come from wells on the site and involve a recirculating system for the water features.

The designer was very interested in using a geomembrane to line the water hazards because of the extremely porous soil conditions in the area. In addition, he was faced with the problem of completing construction of the streams and lakes within 45 days of the initial contact with the fabricator.

Several materials had been considered to line the water features; many were rejected because of the schedule constraints. Concrete was ruled out because of the logistics required to provide the volume of material to be free-formed and placed by hand. A high density polyethylene (HDPE) geomembrane was considered but rejected because specialized equipment and specially trained technicians would need to be sent to the site. A polyvinyl chloride (PVC) geomembrane was a good solution to the problems of logistics and quick completion, but the need for soil cover on the steep side slopes of the streams made PVC an impractical choice.

The solution was a 20-mil UltraTech unreinforced ethylene interpolymer alloy liner, which could be prefabricated in large panels and shipped to the project site. The UltraTech material could be exposed to the weather and installed by the local labor force with minimal training if experienced supervisors oversaw the work.

Environmental Protection Inc. fabricated the material at its plant in Mancelona, Mich. The typical panel size was 12 by 50 meters. The largest panel was 40 by 50 meters for use in a large reflecting pond that would surround a par-3 green. The fabricated material had to arrive in Morocco within 10 days of the order. The liner materials and fusion chemicals were packaged on pallets for air freight, shipped by truck to New York City, flown by Royal Air Moroc to Casablanca, and transferred, again by truck, to the Royal Palace in Skhirat, Morocco.

Our next challenge surfaced in the form of 36 concrete bridges. We had not been told the bridges existed and were not prepared for the sealing that would be necessary where the membrane and bridges abutted. Footbridges every 80 to 100 meters would provide access for golfers and water level control along the sloping site. Cart bridges were located strategically along the fairway cart paths. Vehicle bridges in several areas would provide access for maintenance vehicles and the king's limousine. No provision had been made for battening or fastening the geomembrane to the concrete bridges. Since treated lumber, stainless steel, and ramset fasteners were not available at a corner hardware store, the challenge seemed formidable. Within the next several days, though, Zerduaoui Rachid, the construction foreman on the project, had assembled the necessary materials and equipment. Our first panel could have been installed easily by four men, but we had 40 who all wanted to help and were eager to work with materials they had never seen. We trained two men to do the field welding of the panels' seams and managed to install four panels the first day. 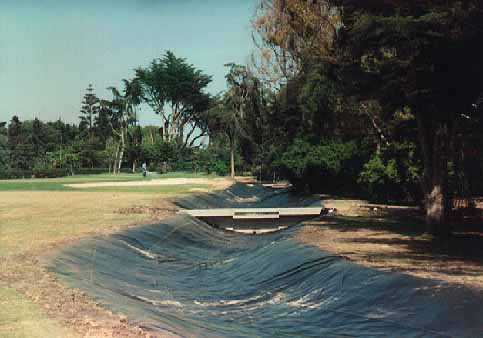 Our second day was much more productive. We cut and fit the stream panels in the most economical fashion to eliminate as much waste as possible. The short field seams (usually 10 to 20 meters) were quick and easy to weld. We calculated that cutting trapezoidal shapes would create a few more field seams but waste much less material, with the excess to be used on the curves and corners.

The installation was completed on time with minimal disruption to the balance of the project or other work on the course. Rachiid’s crew of 12 men installed the balance of the 300,000 square feet of liner in eight days. By the middle of the third day, the crew had taken over the project completely. By the fourth day, Rachiid and Fouad were firmly in control of the installation, with only our minimal supervision and advice. And on the fourth day our luggage and tools finally arrived!

Click here for the article that appeared in Fabrics & Architecture, May-June 1993