Eighteen 100-foot diameter research ponds were constructed in 1971 using 20 mil fish grade PVC geomembrane liner. The ponds are eight feet deep with slopes of three horizontal to one vertical. The PVC geomembrane was covered with one foot of sandy soil cover.

In order to start new experiments, nine ponds were cleared and rebuilt in 1987. In September 2000, the remaining nine ponds were cleared and re-lined with 20 mil fish grade PVC geomembrane liner. It is important to note that NONE of the ponds were leaking nor had any problems while observed with the PVC geomembrane liners. EPI fabricated 9 circular panels of 11,060 square feet each using Geon material from lot number 43464. The one-piece liners were installed in ponds 4-8, 10, and 16-18, by Woolf Excavating of Kalamazoo, MI. who were contracted to clean and reline the ponds. On September 13, 2000 representatives from EPI removed samples of 30-year-old 20 mil PVC geomembrane from the ponds. 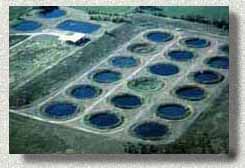 All samples removed from the pond felt very soft and flexible during the removal process. Material removed from the bottom of the pond was softer to the hand than the material from above the water line. Once samples were dried off, the samples felt somewhat less flexible.

All samples were tested at the EPI Quality Control lab in the days following removal from the ponds. Materials were transported in large plastic bags, sealed to minimize moisture loss prior to testing. 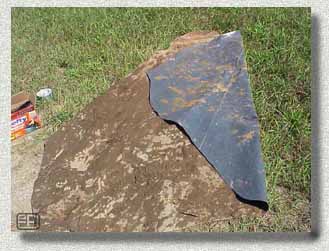 Two samples were tested from each location without any preparation, other than removal of any sand or dirt from the material. Two additional samples from each location were cleaned and allowed to acclimate in the lab for 40 hours according to standard ASTM test methods. These samples are noted as desiccated and are the right most samples on the following graphs.

Samples from each location were tested in both the Machine (MD) and Transverse (TD) direction. The tensile strength for the 30 year old 20 mil PVC liner exceeded today’s minimum specification for all of the samples tested.

It was noted during sample removal that the newly exposed material felt like new liner that would be installed in today’s projects. It was also noted, that in a very short time the material began to loose a little of its flexibility as the material dried out. This is evidenced in the results of ultimate elongation tests run on the 18 different samples. The material that was acclimated in the lab and allowed to dry out, exhibited lower ultimate elongation in two cases, than those samples that were tested without acclimation.

Samples were also tested for modulus of elasticity, which is a measure of tensile strength at 100% elongation. This test will indicate how strong the material is when it is under stress. A low modulus indicates a softer, more elastic material, while a high modulus number indicates a stronger, stiffer material. PVC must exceed a minimum number, which will indicate use of proper plasticizer and other ingredients to make the product flexible, but tear resistant.

After 30 years of service, this 20 mil PVC geomembrane has retained its plasticizer and its flexibility, enabling it to perform its function without fail. It has also retained its strength and has not deteriorated, enduring thirty years in a buried environment. It has also resisted puncture by roots, biological attack from microorganisms, and has had no detrimental effect on the environment that it has protected since 1971. 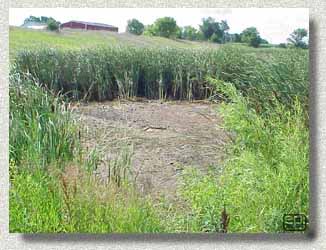 The potential for root penetration was a big question in the forensic study of these ponds. Each of the ponds had a large amount of cattails around the perimeter of the pond.

As the bulldozer removed the dirt from the top of the liner under the cattail area, careful observation was made of the root zone of the cattails. These cattails produced one root stalk about 3/4” to 1-1/4” in diameter, with a mass of smaller roots around the main root. The root length was approximately 1 to 3 feet. All roots of the cattails grew down to the liner, then grew horizontally along the top surface of the liner. No evidence of liner intrusion was found. 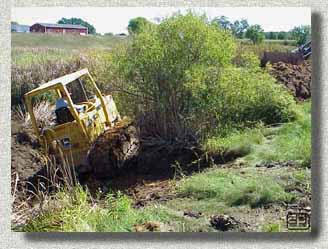 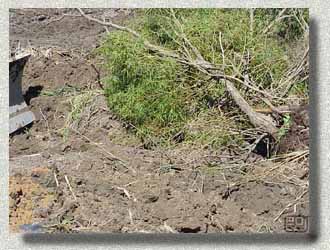 As the bulldozer operator cleared the dirt from the sides of the tree, it was observed that the tree roots grew similarly to the cattail roots. They grew down to the liner, then turned and traveled along the surface of the liner. Main roots were 3-5 feet long, with some smaller roots up to 7 feet from the trunk. When the dozer pushed the tree, it slid down the liner to the bottom of the pond, leaving the liner intact. No damage was found from roots penetrating the liner. 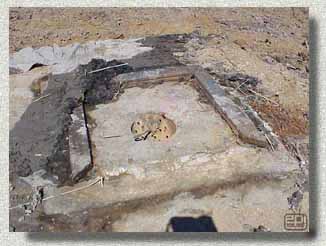 In the center of each pond was an inlet/outlet structure. This concrete slab was approximately 2.5 x 2.5 feet, with the top level with the liner sub grade. The liner was placed over the concrete, sealed with mastic, and fastened to the concrete using 2"x4” redwood batten strips and concrete nails. This structure and the batten appeared to perform well over the thirty years as indicated by no discoloration of the soil color under the liner and around the structure.