Shallow water acquirers that provide a source of easily accessible drinking water are an easy target for contamination caused by polluted stormwater run-off. Contaminants such as brine, oil, fuel, pesticides, and fertilizers potentially can damage groundwater resources. Interception of these contaminants and their ultimate disposal is becoming a common problem to be addressed by the geotechnical industry. Typical Cross Section

The Michigan Department of Transportation (MDOT) has addressed this issue at its Reed City facility which is used on a regular basis during winter months to provide road sanding operation.

When the site was constructed in 1977, a containment pond was built to collect water run-off from the parking lot surrounding the salt storage building and the area where road sanding equipment is maintained: The pond was also designed to gather run-off from the truck loading areas and the service facility floor drains. This original 70' x 115' containment basin with one inlet pipe was constructed using asphalt bituminous concrete.

Unfortunately, over a period of time, the asphalt began to dry out and separate, forming cracks and openings which allowed the water to escape. Several attempts at repairing the pavement membrane were made, but these repairs did not provide a permanent solution. In early 1989, MDOT decided to abandon continued asphalt repairs and search for an alternative, long-term solution to their containment requirements. After investigating the use of geosynthetics in containment applications, they prepared to solicit bids to line the pond using this technology.

To keep labor costs to a minimum, MDOT was interested in a geosynthetic lining system which could be installed directly over the existing asphalt. The request for quotation specified a polymeric membrane liner with a minimum nominal thickness of 30 mil which was resistant to sunlight, oil and normal weathering conditions. The normal weathering conditions in northern Michigan are considered to be harsh, with temperature extremes ranging from sub-zero (Fahrenheit) to the high nineties.

A one-piece geomembrane liner was required to eliminate field seams and minimize installation costs. Because the containment would serve the entire facility, compatibility with all other potential contaminants such as brine and motor fuel was also of prime consideration.

The quotation selected was a proposal submitted by Environmental Protection Inc. (EPI), Mancelona, Mich. The combined 30 mil UltraTech geomembrane liner installed on top of a layer of Amoco #4553 nonwoven geotextile was recommended to accommodate the geology of the subgrade. The system was selected for its ability to meet the environmental demands of both the contained products and the natural weather elements of northern Michigan.

A bonus was relatively fast installation, eliminating the risk of having the pond removed from service during a possible rainstorm.

One of the requirements was to install the lining system directly over the existing asphalt. This subgrade included pea stone which had been used in previous repairs. In order to protect the geomembrane liner from potential damage, it was necessary to use a heavy nonwoven geotextile for an underlay. The eight-ounce-per-square yard, needle-punched geotextile made of 100 percent polypropylene, was chosen for its substantial resistance, tear resistance, and tensile strength. Its minimum 185 lb. grab tensile and 380 psi Mullen Burst specifications are considered appropriate for this application. The standard 15' x 300' rolls would also contribute to the speed of the installation. 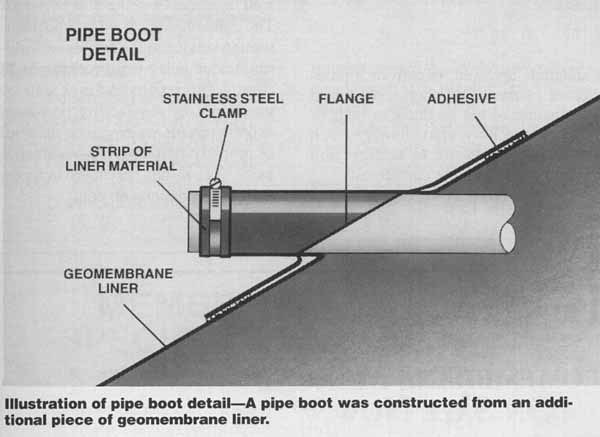 The geomembrane liner was recommended because of its conformability, weatherability, and compatibility. It is an ethylene interpolymer alloy (EIA) membrane formulated without liquid plasticizer. The inherent characteristics in its combination of high molecular weight polymers retain long term flexibility in extreme temperature environments. It is not subject to crazing or stress cracking from heating, high thermal expansion, or localized stress concentration geometry’s. Equatorial Mount with Mirrors for Acceleration Plus Water Spray (EMMAQUA) accelerated aging tests have shown the EIA membranes resist checking and cracking after exposure equal to 20 years of normal ultraviolet exposure.

Given the properties of high elongation and high tensile strength (290 percent and 2300 psi minimum respectively per ASTM D-882), the EIA membrane is able to conform to irregularities while still providing a tough, abrasion resistant membrane. This conformability property eliminated the need to regrade or reshape the existing pond.

Compatibility with the potential contaminants was integral in selecting a geomembrane product which had been effectively tested with brine as well as many different petroleum products including diesel fuel, kerosene, naptha, and crude oil.

Another selection factor was that the EIA membrane liner could be factory fabricated in one piece, resulting in quick installation and eliminating any field seams. The pond was removed from service for only a very short time and cost savings for the MDOT were considerable.

The 77 ft. by 122 ft. geomembrane liner was factory fabricated in August of 1989. Samples of actual factory seam were removed from the panel and destructively tested for shear and peel. This was done in accordance with NSF Standard #54 which requires a minimum of 55.2 Ibs. per inch shear strength and 10 Ibs. per inch peel strength.

The 1,973 pound, 9,394 square foot liner was accordion folded and packaged for shipment. Concurrently, the four rolls of mill certified nonwoven geotextile were delivered to the project site by Construction Supply, Inc., Amoco's Great Lakes Area Distributor. The MDOT drained the basin and removed any debris that was present. Using a trenching machine in the soft sandy soil, they prepared an anchor trench for the geosynthetics.

EPI's eight-man installation crew arrived at the site at approximately 9 A.M. They first proceeded to deploy the geotextile directly over the existing asphalt in the basin. In order to ensure that the material would be held in place during deployment of the geomembrane, four 122 ft. long seams were constructed using a bonded nylon thread with a minimum tensile strength of 10 Ibs. Utilizing aSewing Geotextile Fischbein portable sewing machine, a two-thread double lock chain stitch was applied to reduce the potential for unraveling should a thread be severed. 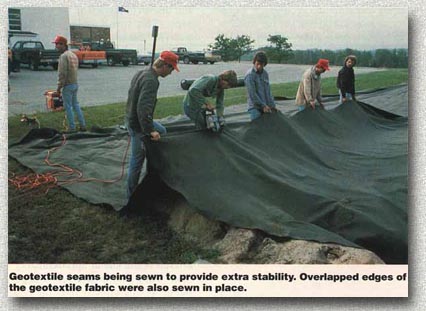 Directly after securing the geotextile in the anchor trench with a layer of earth, the geomembrane liner was unfolded and laid in the containment basin. While allowing the liner to remain in a relaxed condition by providing a minimal amount of slack, the geomembrane was smoothed out and wrinkles removed. The liner was then secured in the same trench as the geotextile.

While the anchor trenches were being backfilled, a pipe boot was installed around the pond's only inlet pipe. The geomembrane boot was drawn up around the lip of the inlet pipe and secured with a stainless steel clamp. The flange was adhered to the liner with a chemical bonding agent to form a watertight seal. The field weld around the pipe boot was air lance tested at 50 psi through a 3/16" diameter nozzle to assure seam integrity.

Immediately after project completion, a representative of MDOT inspected the entire installation. The total time involved at the site was approximately four hours. Total cost to MDOT for the materials and installation labor was $8,336.

Any containment must be designed as a system. Specifying the appropriate geosynthetics for a particular application must take several things into account. It includes the geology of the subgrade involved, the physical properties of the geosynthetics used, and the nature of the products to be contained. It may also involve such aspects as exposure to sunlight and other natural weather conditions. 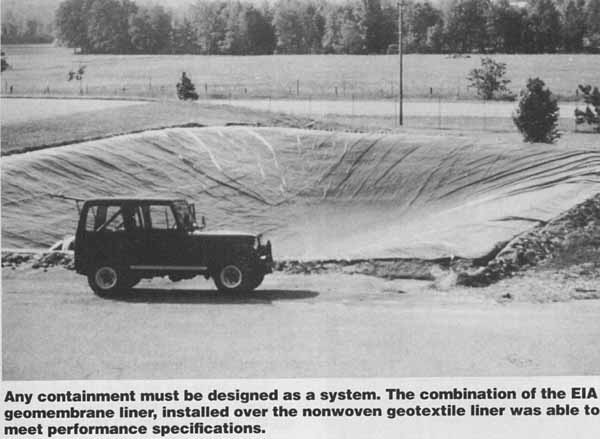 The MDOT Facility in Reed City, Mich., required its containment basin be lined with a geosynthetic system that could provide an impermeable barrier to brine, oil, motor fuel and other petrochemicals. It had to be able to withstand sunlight, temperature extremes and other climate conditions found in northern Michigan. It had to be installed over the existing asphalt and the liner could not have any field seams. Installation time and cost were also factors.

The Completed Installation combination of the EIA geomembrane liner, installed over the nonwoven geotextile liner was able to meet all of the performance design requirements. The use of these geosynthetics in this project represented a substantial savings in time, as well as dollars for the end customer. The problem was solved without interrupting service to the facility or incurring undue delay to correct the situation. The exposed liner can be monitored by the facility personnel and the run-off water can be disposed of properly should any contamination exist. The results are an environmentally safe containment pond.

EMMAQUA: Equatorial Mount with Mirrors for Acceleration plus Water Spray.

About the Author: Fred P. Rohe was a member of the EPAs Thermoplastic Task Group and a participant on the Joint Committee on Flexible Membrane Liners for the National Sanitation Foundation (Standard i54). He was instrumental in forming the PVC Geomembrane Institute.