ABSTRACT:  Air channel strength testing of dual track thermal welds of PVC geomembranes has been developed to provide quality assurance for the full length of PVC geomembrane field welds, eliminating the need for cutting holes in the liner to perform destructive peel testing.  The testing method was evaluated by ASTM Committee D-35 and was adopted as ASTM D 7177 Standard Specification in June 2005 and has been published in time for use in the 2006 construction season.  This paper will present a detailed case history of the installation quality control and engineering quality assurance programs implemented on the 2 million square foot (185,000 M2) PVC geomembrane closure installed on the Georgia Pacific Paper mill sludge landfill in Parchment, MI, USA.  This first of its kind PVC air channel strength testing Quality Control program was developed in conjunction with the Michigan Department of Environmental Quality and the design engineers at Blasland Bouck and Lee, Inc. (BB&L).  The 30 mil PVC geomembrane was installed using dual track thermal welding and over 10 kilometers (6 Miles) of field seams were air channel tested for seam peel strength and continuity.  The success of this project has provided the basis for implementing this new technology for testing PVC geomembrane field welds and for developing an ASTM standard test method for the geomembrane industry.

In 1990, the author began experimenting with thermal welding of PVC geomembranes.  The original motivation was to develop installation and welding methods that would extend the construction season in the cold northern climates of the USA.  Subsequent projects such as the Coachella Canal Underwater Lining Prototype clarified the need for a more rapid and faster curing method for welding PVC than the chemical or adhesive methods being used at the time.  With the advent of wedge welding of HDPE geomembranes, engineers became more comfortable with that method than extrusion welding.  Further refinement of the dual track process made it the method of choice for many QC firms.  In the mid 90’s thermal welding of PVC was somewhat of a novelty in the USA, but eventually caught on with installers.  Many used a single wedge machine and continued to use old fashioned air lance testing to verify seam integrity.

During this period, welding equipment manufacturers also began developing smaller, lighter weight machines that were better suited for welding highly flexible materials like PVC.  Most of the wedge machines used a single wedge approximately one inch wide.  Hot air machines were introduced that used a wedge or a nozzle for producing single or double seams.  The authors began experimenting and developing procedures to dual track weld PVC so that air channel testing could also be done on PVC.   Early attempts with the heavier machines used on HDPE were less than desirable.  There were many difficulties making long seams in the flexible PVC.  Light weight hot air welders that could easily adjust nip roller pressure proved to be the solution for making high quality PVC seams.

Continued experimentation with air channel testing on 30 mil PVC geomembrane projects produced mixed, but encouraging results.  Testing the air channel using methods similar to those used on HDPE was the starting point.  However, in the hot summer months, air channel testing flexible PVC at high ambient temperatures with the high air pressures required for the more rigid HDPE proved to be more damaging to good PVC seams than it did to find flaws.  Other ideas needed to be explored.

In 2001 the PVC Geomembrane Institute funded basic research by TRI Environmental on the thermal welding temperature variables for PVC geomembrane.  This initial research lead to the conclusion that air channel testing of PVC geomembrane dual track welds could provide accurate information about the peel strength for the full length of the weld.

This research was continued in early 2002 by TRI to find the optimum welding conditions for PVC and to further asses the author’s theory that air channel testing of PVC dual track welds could confirm the minimum peel strength of the weld and eliminate the need to cut any destructive samples. 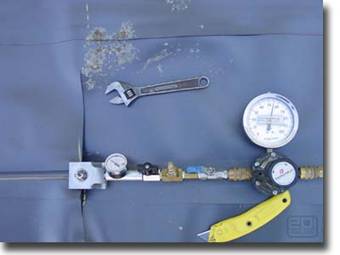 Each seam was peel and shear tested in the laboratory according to ASTM D 6392. Each seam was made long enough to allow air channel testing of each of these seam combinations to be conducted at three different ambient test temperatures.  This allowed for analysis of the effect of ambient temperature on each of the air channel tests for different weld variables.  Each seam section was tested until burst (Fig.1).  The results of the testing provided broad information about the effect of ambient sheet temperature on the air channel test as it relates to the peel strength of each weld. 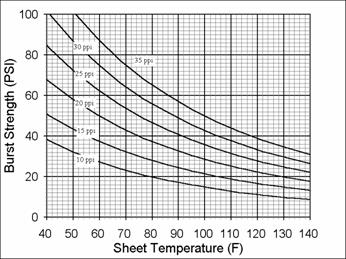 The Georgia-Pacific paper mill in Parchment, MI was unable to obtain LLDPE geomembrane for a landfill closure project scheduled for installation in the late summer of 2002.  Engineers from Blasland Bouck & Lee (BB&L) were encouraged to consider using PVC geomembrane as a substitute for the 40 mil LLDPE textured both sides, and still meet all permit requirements.  Environmental Protection, Inc. (EPI) worked with BB&L and the Michigan Department of Environmental Quality to provide all the information necessary to revise the specifications and permit applications.  Revisions were made to the CQC/CQA plan to insure that all materials and welding methods would meet MI-DEQ permit requirements. 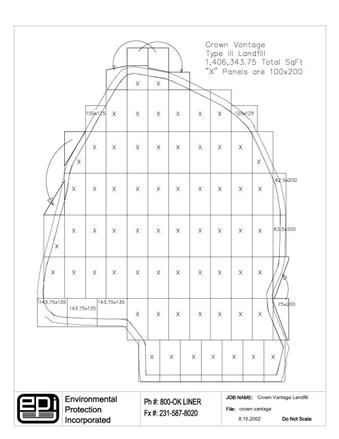 
The project consisted of two cells.  The Type II cell was an ash fill requiring 55,000 M2 of 30 mil PVC liner.   The liner was placed directly on the fine, black ash material compacted on the 3/1 slopes of the cell.  The second area was a Type III waste cell that had been covered with two feet of sand material by Terra Contracting, LLC, the prime contractor on the project.  This cell required 130,000 M2 of PVC.  The PVC liner would also be placed directly on the sand layer already placed over the Type III waste on slopes varying from 5/1 up to 3/1 shown in the photo (Figure 4). 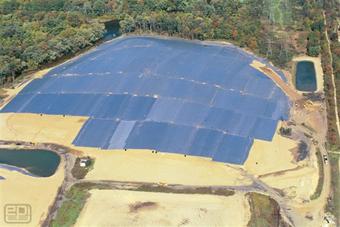 
The Type II cell required 32 panels to cover the 55,000 M2 (598,200 sq. ft.) footprint.  2,500 M (8,200 lineal ft.) of field seam was required to seal the panels together on the 3/1 slopes of the waste pile.  Installation and thermal welding of liner started in September, even before fabrication of all the material for the cell was completed.  The MI-DEQ requirements for weld testing for this project included trial welds from each machine at the start and end of each welding session.  That meant trial welds needed to be tested in shear and peel at start up in the morning, before shut down at mid day, at start up again after any break in welding (i.e. lunch), and finally again before shut down of the welder at the end of the day.  Only one sample for destructive testing of shear and peel strength would be removed for independent laboratory testing each day that welding was performed, no matter how much field seam was welded that day.

All field seams were also to be non-destructively air channel tested (Fig. 5) according to established levels for air pressure and sheet temperature.  Based on research previously completed by EPI and the PGI, the installer was able to verify that peel strength exceeded the minimum requirement of 15 lb/in (2.6 kN/m) width for the full length of EVERY field seam. 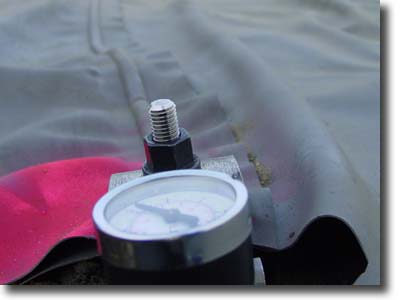 
The much larger Type III cell (Fig. 3 & 4) required 72 prefabricated panels to cover the 130,000 M2 (1,406,345 sq. ft.) waste pile.  The majority of the panels for both cells were 100 feet wide and 200 feet long.  Over 7 km (23,000 lineal feet) of field seam were required to weld the panels together.  While 4+ miles of field welding may seem like a huge number, this is 70% less than would have been required with LLDPE.  Air channel testing of the dual track PVC welds also eliminated 75% of the destructive test sampling that would have been required on this project (>200 sample holes for polyethylene).

In June 2003 EPI introduced the first draft of a standard specification for air channel testing of PVC thermal dual track welds based on the research completed and on actual field experience with welding and air channel testing large scale projects using PVC.  The process of ASTM peer review was completed in June of 2005 and ASTM D 7177 Standard Specification for Air Channel Evaluation of Polyvinyl Chloride (PVC) Dual Track Seamed

Hot air welders have a distinct advantage with PVC in that they do not produce a buildup of burnt material on a wedge that can then scrape off and be deposited in the seam, causing inconsistencies in seam peel strength.  Overall weld quality is superior with hot air welders than with current wedge welder technology for PVC geomembranes.

Air blowing from the nozzle into the seam from hot air welders also removes dirt, debris and moisture prior to melting the material, creating a more consistent weld in PVC.

Air channel testing of PVC geomembranes has developed to the level that it is possible to verify the peel strength of 100% of the length of dual track welded PVC field seams.  This method also exposes failing portions of seams (no matter how small) that destructive testing does not identify.  When combined with an Electronic Leak Location Survey, it is now possible to test the strength of every cm of PVC field weld and every square cm of material.