By Fred P. Rohe
Environmental Protection, Inc., U. S. A.

Environmental Protection, Inc. participated in the design and development of a prototype system to install a 30 mil PVC liner and 3 inches of concrete underwater in the Coachella Canal located in Southern California. This project, under the direction of the U.S. Bureau of Reclamation, is the first of its kind anywhere in the world. The development of this technology required the cooperation of many different suppliers, including EPI, under the coordination of the prime contractor, Kiewit Pacific Company. The development and implementation of a unique solution to liner placement underwater is the beginning of a significant effort to conserve water resources and to reduce canal maintenance and construction costs.

In the spring of 1988, EPI was one of several suppliers to bid on providing a 30 mil PVC geomembrane liner for the U.S. Bureau of Reclamation. The project, titled "Coachella Canal In place Lining Prototype, All American Canal Relocation, California," is the first of its kind anywhere. After completion of the bidding process, the Bureau of Reclamation determined that Kiewit Pacific Company, of Santa Fe Springs, California, should be awarded the contract. In the Fall of 1988, EPI was contacted by Mr. Bill Giroux, Design Engineer for Kiewit, regarding the supplying of the PVC geomembrane liner. The initial meeting in September of 1988 involved preliminary research regarding the feasibility of the preliminary design work done by Mr. Giroux. Over the next several months, much research and development was done in order to solve the problems of handling the PVC liner during the inplace lining process. Since the project was being done on a fast track schedule, actual fabrication of much of the equipment was being undertaken while other development was being done regarding the handing of the liner material. Fabrication of the geomembrane was undertaken during February and March of 1989 with shipment to California and actual placement of liner in the canal beginning in May of 1989.

Polyvinyl Chloride (PVC) was selected as the membrane lining material for the underwater application at the Coachella Canal. The Bureau's selection of PVC was based on many factors, including:

Since the lining of the canal was to be done in two passes requiring a longitudinal seam in the PVC liner down the center of the canal, it was necessary to use a geomembrane that could be sealed underwater. Since an unbonded longitudinal seam would not provide the necessary seepage control, laboratory studies concluded that a vinyl swimming pool adhesive used to repair pool liners would be a suitable adhesive for this seam. Laboratory test results of seam strengths for the underwater seam proved comparable with normally fabricated field seams, even though these were constructed underwater.

There was also a concern that the freshly placed concrete would have a tendency to slough down the slope of the canal sidewalls. Initial design requirements called for the application of a 3.4 ounce per square yard non-woven geotextile fabric on the side slopes on top of the PVC. The final solution involved the contractor gluing this geotextile to the PVC liner at their facility in Santa Fe Springs. The liner panels were then refolded and rolled prior to installation at the project site. It is anticipated that a factory laminated product, which will provide both the 30 mil PVC and a non-woven geotextile bonded to one side of the liner, will be available for future projects.

This product will save considerable time and manpower in the placement of the two materials at the same time. Currently, a new GeoLam product is being introduced by Occidental Chemical Corporation, which has evolved from the research and development on this canal project.

Since the PVC material had never been used in this type of application, there was no data available as to how the membrane would behave during the underwater installation procedure. The preliminary design concept, proposed by Bill Giroux, involved holding the PVC in a manner much like a garage door track supports the sides of an overhead garage door. The track design called for the inclusion of a hem in the liner material along both sides of the panel. This hem was to be filled with a rope to provide body and hold the liner securely in the guide track.

The development involved the use of a PVC jacketed nylon rope. In order to develop data as to the behavior of the liner in this application, EPI fabricated for Kiewit Pacific, several full size samples of the PVC liner. In addition, EPI fabricated a small section of liner 60 feet wide, which was furnished to Mr. Giroux at his office in Omaha, Nebraska. Mr. Giroux proceed to do full scale testing with this liner at the YMCA pool in Omaha. From the data generated in these tests, it was determined that support of the liner on the two outside edges would not be sufficient to control the final placement of the liner. The design was then modified to have two center guide tracks, one at the toe of the slope, and one at the centerline of the canal. The outside guides would be at the top of the slope, and at the outside edge of the three foot overlap in the canal bottom. The center guides posed a problem in that a hem type seam would be subjected to forces which would exceed the normal peel strength of the seams.

The challenge for EPI was to develop a fabrication process which was both effective and cost competitive to provide the liner panels for this project. EPI developed a system whereby the ropes could be anchored into the PVC liner, and seams made with sufficient strength to resist the forces that would be placed on the liner during the underwater placement of the geomembrane. The final fabrication techniques are a proprietary process of Environmental Protection, Inc. The process was inspected in operation by the U.S. Bureau of Reclamation. All fabricated panels were tested for bonded seam strength and peel adhesion of the factory seams and a sample of each roll of material was supplied to the Bureau of Reclamation for physical property testing. In addition, all material that was supplied for the project by Occidental Chemical Corporation was also tested for compliance with the project specifications.

The prototype project was to line 1.5 miles of the Coachella Canal near Niland, California. The canal at this section was approximately 110 feet wide, and 9 feet deep. The side slopes of the canal were approximately 2.5:1. Since the canal was built 49 years ago in the sandy desert soil, it was necessary to reshape the canal prior to the placement of liner and concrete. A machine to dredge the canal and place a new sub-base of crushed aggregate was also designed and built by Kiewit Pacific. This machine precedes the paving unit and reshapes the sides and bottom of the canal to line and grade. 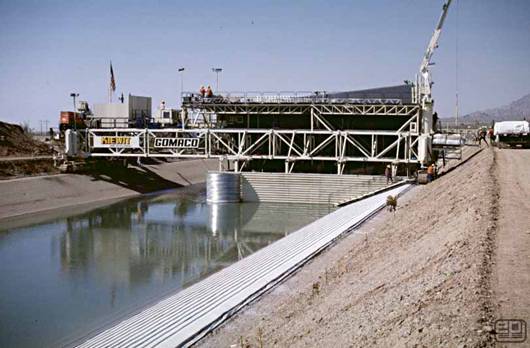 
After shaping is completed, the paving unit proceeds to travel along the canal, placing the PVC/geotextile composite in place directly in front of a slipform paving unit designed and constructed by Gomaco, of Ida Grove, Nebraska. After paving one half of the canal, the machine is turned around, and proceeds to pave the second half of the canal from the opposite direction. Based on design, speed, and availability of concrete, working 24 hours per day, it was estimated that the paving of 1.5 miles in one direction could be accomplished in approximately 3 days.


The initial paving operation was started in May of 1989. At that time, the water usage requirements in Southern California were reaching their peak. It was necessary to be able to regulate the flow of water so that the many adjustments to all of the various operating systems of the paving unit could be accomplished in reasonable fashion. Initially, about 1,200 feet of lining was placed during early May. The balance of the paving will be completed after modifications are made to the equipment to accommodate the soft substrate that underlies the canal bottom.

The selection of PVC liner for this project has proven to be an excellent choice. The custom fabrication of the PVC liner for handling during placement by this equipment was accomplished with minimal additional cost for the geomembrane liner. In addition, the performance of the liner and geotextile combination for this project has shown itself to be very satisfactory. After completion of the lining of this section of the canal, the Bureau of Reclamation will monitor the performance to determine whether additional section should be lined and completed at a future date. Sections of the All-American Canal, which feeds the Coachella Canal, are being surveyed for potential relining efforts. The need to maintain water quality for environmental reasons prompted an environmental impact study before the project was started.

Extensive monitoring of the water quality is occurring during the placement of concrete and liner in the canal. No adverse effects to the environment have occurred or are anticipated. Since the canal supports a fishery with 16 different species, as well as the irrigation water to the Coachella Valley, the environmental priorities are very important.

It is estimated that by relining this canal, up to 115,000 acre feet annually (enough fresh water for up to 150,000 households) will be conserved. User fees generated from the water saved will offset the cost of the relining of the canal. The 5.2 million dollar contract is being shared by the Bureau of Reclamation (40%) as well as the Metropolitan Water District (54%) and the Imperial Irrigation District (6%), both of which serve the end users of the canal. The estimated cost to line the rest of the Coachella and the All-American Canals is estimated at $170 million. If initial estimates hold true, this figure is about 40% less than the alternative of constructing new sections of canal.

The development of a prototype lining system will eventually produce a new method to conserve water resources and to provide a method of remediation for existing canals that have been in service for many years. The development of equipment and process to place a PVC geomembrane underwater, without disturbing or restricting the water supply will be a boon to the eventual long term maintenance of this water supply system. This project is being viewed by engineers and water professionals from around the world. Its eventual evolution into a significant industry is becoming a more substantial possibility each day.