Film tearing bond(FTB) has been preached by the geomembrane industry as the minimum standard criteria for years.  FTB is required of HDPE materials requiring the seam to be stronger than the material itself, while the material has functional elongation less than 20%.  This simply isn’t the case with PVC because of its high elongation, ability to conform and adjust to minor soil movement.  PVC Geomembrane material with a normal strength seam of about 10 lbs per inch width can withstand 200% elongation without seam failure.  Requiring the welding process to create FTB in the seam at the expense of raw material properties sacrifices the ultimate goal of geomembrane integrity.

A wide sampling of seams in 0.75mm and 1.0mm PVC Geomembrane have been elongated and held at 100% and 200% elongation in a custom built apparatus for over a year.  No failures in any of the variety of seams have been observed to date in this ongoing test.  The research conducted by EPI will be presented in this paper.

One of the first industry standards was the National Sanitation Foundation Standard 54 (NSF-54)1 in 1983.  This industry standard was created by geomembrane industry professionals in a consensus agreement.  The last revision was in 1993 and subsequently, the National Sanitation Foundation withdrew their support of Standard 54.  The geomembrane industry continued to use it and reference it.  Amazingly almost 20 years after it was abandoned, some projects still refer to it.

In 1996 the PVC Geomembrane Institute (PGI) filled the void when they published their consensus specification on January 1, 1996 (PGI-1196)2.  Subsequent versions were also released, PGI-1197, PGI-1103 and PGI-1104.  The PGI Specifications failed to become the industry standard the organization had hoped.  The Technical Director at Canadian General Tower, Ltd approached ASTM to create a material specification that would carry the credibility of the ASTM Organization.  In 2006, ASTM D71763 Standard Specification for Non-Reinforced Polyvinyl Chloride (PVC) Geomembranes Used in Buried Applications was published.  This was followed by ASTM D74084 Standard Specification for Non Reinforced PVC (Polyvinyl Chloride) Geomembrane Seams in 2008.  These are now the industry standard.

While film tearing bond (FTB) is not technically spelled out as a requirement in current industry standard specifications for PVC Geomembranes, we commonly see this requirement carry over from the polyethylene world.  In ASTM D6392, it refers to and directs the laboratory to measure peel incursion.  If a seam is only acceptable with less than 25% peel incursion, that means the parent material sheet fails before the seam peels open.  When this protocol is carried over to a PVC project, the requirement is essentially the same as requiring FTB.  It may not be written in current industry specifications, but we see this requirement commonly carried over in projects during the copy & paste of new project specifications.  The other common scenario comes up during the installation of PVC Geomembranes when the CQA Technician, who only has experience with polyethylene, tries to apply what he/she knows directly to the PVC Geomembrane.  The standards and requirements are very different because these materials are very different.

The relationship between peel and shear

There is a relationship between peel and shear as it applies to seam strengths but there is a very distinct difference between the function of peel strength and shear strength.  Shear stress is the stress on the seam when the top sheet and bottom sheet are pulled in opposite directions.  Shear mode is representative of the stress normally seen in the field.  Peel testing is a full frontal assault on the seam to verify its internal strength by peeling the sheets apart.  Peel mode is rarely seen in the field and only if there is a flap on the seam.

There is a minimum amount of peel strength needed to ensure a good seam that performs as intended without failure.   When industry standards for PVC geomembrane were first introduced, 1.8 kN/m (10 lbs/in) was the agreed upon minimum requirement.  After more than a decade of experience, the PVC geomembrane industry agreed that 2.6 kN/m (15 lbs/inch) was achievable in 0.75mm (30mil) and thicker PVC geomembrane seams and increased the industry minimum peel strength.  That is where the minimum specification stands today.  The author agrees that this minimum peel strength needs to be achieved to maintain a high quality seam.

After being asked why PVC Geomembrane can’t meet FTB on seams for so many years, EPI decided to do some research into what a seam can withstand.  One of PVC geomembrane’s significant advantages is its flexibility and elongation properties.  Typical samples can range from the minimum 380% up to 550% elongation at break.  We asked ourselves the question, at what point is the performance of the seam stronger than the field application?  Creating a seam with exceptional peel strength (0% peel incursion or FTB) while potentially sacrificing the shear strength of the seam is ultimately counter-productive.  This author believes that there is a point in the design where the project fails before the physical properties of the geomembrane fails.  If the typical 2.6 kN/m (15 lbs/in) seam exceeds the project design and the factor of safety, then why require a seam with FTB (0% peel incursion)?

More than a year ago, we took samples and elongated them in our laboratory.  For the purpose of this research, we initially chose an elongation/movement of 100%.  To increase the level of confidence, all the testing was mirrored at 200% elongation.  There were several seams made using chemical fusion welding with peel specimens cut from opposing ends and tested in the tensiometer to bracket a consistent seam.  These specimens gave us information on the peel and shear strength of the seam.  Four seams that were consistent and had constant peel strength were chosen at 3.0 kN/m (17 lbs/in) and 4.7 kN/m (26 lbs/in) for both 0.75mm (30 mil) and 1.0mm (40 mil) thickness. 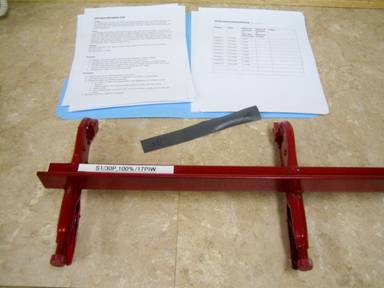 This was repeated 9 times for each sample on March 11, 2009 (see Table 2).  These clamped samples were then stored in the warehouse where they wouldn’t be physically disturbed (see Figure 2).  The samples were inspected daily for the first 90 days and then weekly since then.  The inspection on May 20, 2009 revealed a broken sample #4.  It is believed the sample was scored or deformed by burrs on the clamp which prematurely caused it to tear at the clamp.  The clamp was smoothed off and a new specimen was prepared, clamped and hung back with the samples. It is important to note the sample failed at the edge of the clamp and not anywhere in the seam. 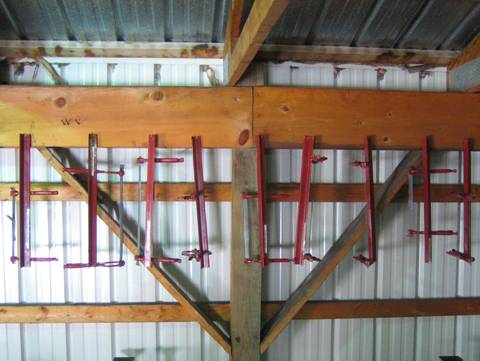 Film tearing bond is the requirement that the bond of the seam is stronger than the parent film and the film itself fails before the seam fails.  This requirement applies to high density polyethylene(HDPE) films because they have such a small window of functional elongation.  When the HDPE material only elongates 50% before it breaks5, it’s very important that the seam never comes apart.  PVC geomembrane has a completely different molecular structure which gives it excellent elongation properties.  While the PVC material does thin out as it is elongated, it does not exhibit any yield point typical with polyethylene.  At 200% elongation the 0.75mm (30mil) and 1.0mm (40mil) PVC geomembrane did not exhibit any failures in peel or shear mode.

At the time of this writing, it has been 15 months now without a single specimen failing in the seam.  It’s hard to imagine a landfill slope or a lagoon that could withstand over 200% movement without a catastrophic failure.  PVC geomembrane is a resilient material that can easily withstand up to 200% strain without failure in a 3.0 kn/m (17 lbs/inch) seam.  Creating a FTB seam which sacrifices the integrity of the PVC material and/or results in a lower shear strength value detracts from the overall performance of the PVC geomembrane.  Therefore universally applying the FTB requirement from other materials simply isn’t applicable to PVC Geomembranes in most applications.