The city of Detroit is in the process of reclaiming its river front. Over the years the area has been dominated by business and industry but the area has become an embarrassment. The Detroit Riverfront Conservancy was created with the mission of revitalizing the waterfront area. The first phase of this undertaking was the Louis Arena to the Douglas MacArthur bridge to Belle Isle. People are to run, walk, bike and roller-blade on the new RiverWalk, which will also include places for people to sit and take in the scenery.

A portion of the RiverWalk passes directly between the General Motors (GM) Renaissance Center buildings and the Detroit River. GM retained Albert Kahn Associates to design a suitable plaza and promenade to blend as part of the RiverWalk project. The plaza includes a granite world map showing the GM facility locations world wide. John Carlo, Inc. was selected as the prime contractor to build the plaza as a showpiece for the GM Center. 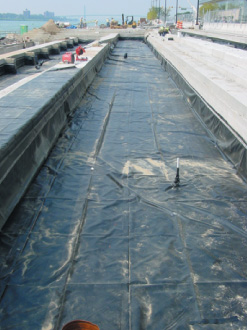 Planter boxes were lined to create a tree-lined tiered walkway.

The area selected for the plaza has seen many varied uses over the past century. There are many unknowns regarding the soils and other materials deposited there. It was known that the area had experienced some subsidence and the fill in the area was over soft soils. The area is bounded on one side by a service areaway and on the other by a concrete sea wall at the river’s edge. The site’s close proximity to the Windsor Tunnel under the Detroit River to Canada was another important consideration.
The plaza area needed to be raised approximately four meters above the existing parking lot area it is replacing. The designers selected expanded polystyrene Geofoam for use as fill material. The 1.5 pounds/square foot density Geofoam would save weight, reduce lateral pressures on the adjacent structures, and speed construction at the congested work site.

Hydrocarbons have a devastating effect on contact with expanded polystyrene foam. In order to protect the Geofoam from damage by an accidental spill of fuel or other hydrocarbon materials, the designers utilized a geomembrane.

8130 XR-5 was selected to cover the top of all areas where Geofoam was installed. XR-5 is a PVC coated fabric formulated using Elvaloy, a chemical resistant polymer which imparts flexibility to the geomembrane.
Protective sand layer was broadcast-spread over geomembrane liner. 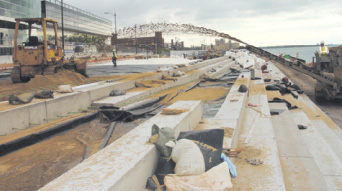 The GM Renaissance Center Plaza and Promenade is a public area in downtown Detroit. GM will be displaying vehicles at the plaza as well as hosting many outdoor events in the area. The plaza will also be heavily landscaped to provide an enhanced look to the park like setting. The plaza is also directly adjacent to a busy city street with all types of vehicles all types of vehicles traveling in the congested area. There is legitimate concern for a possibility of an accidental fuel spill. Therefore it was necessary to take precautions to protect the Geofoam from any adverse exposure to chemicals that would dissolve the foam.

Environmental Protection, Inc. (EPI) was selected to provide over 4,700 square meters of XR-5 geomembrane liner for this project. Over one acre of XR-5 was prefabricated to fit the varying shapes of the plaza and the many planter boxes and planting areas that were incorporated into the design. Each area of the plaza where Geofoam was installed had to be covered with geomembrane. The XR-5 material was installed directly over the foam, or over a sand cushion that was installed on top of the foam in some areas.

Since the geomembrane now acts to collect any fluid, including rainwater, a drain age system had to be implemented above the liner and drain piping to direct the water away from the plaza. The liner was sealed to these drain pipes using prefabricated EPI Tapered Pipe Boots. Boots were custom fabricated of XR-5 for each pipe diameter used on the project. EPI also prefabricated inside and outside corners to simplify the installation of the XR-5 around the many column foundations and intricate corners in the planter areas.

Installation of the XR-5 had to be coordinated with the many other subcontractors working on the site. The area was so congested that the installation had to be done in phases in order to allow enough area for everyone to operate efficiently.

The XR-5 geomembrane provided an excellent solution for protection of the EPS Geofoam on this project. The material was easily fabricated to fit the unusual shapes and dimensions of the plaza and its many planters. Installation was rapid, with very little field welding required.

While unlikely, it is possible that an accidental spill could cause serious damage to the Geofoam underlying the GM Renaissance Center Plaza and Promenade. The foresight to provide protection for the EPS foam will ensure that this area will be use-able and useful to the visitors to the Detroit river front for many years to come.